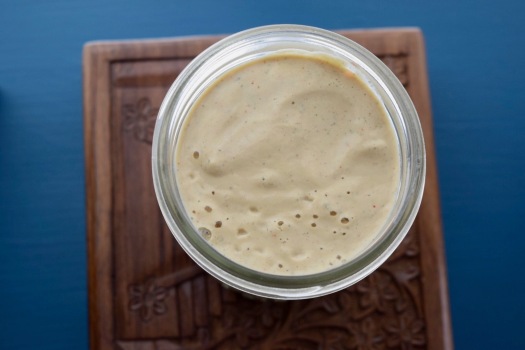 As you know I like making oil free sauces to pour over raw or cooked vegetables. Here is another one! Throw all of the ingredients into a blender and blend until smooth. Wowzah! So creamy so tangy so zesty... Put over a salad, dip cucumbers and carrots into it, drizzle over steamed green beans; pour over a baked sweet potato or a classic russet... Just do it! Soy is controversial these days and everyone you talk to will have a different opinion. I've linked a few research articles (below) that show the benefits of soy. Of course with all the genetically modified stuff it starts to change the conversation since we don't really know how all these modified foods will affect us in the long-term. My opinion, however, is that it is far better to eat healthy plant foods rather then eat the saturated or trans fat laden snack foods and animal products our Western culture typically consumes. All you need to do is choose organic soy because by law it will be GMO free. This way we know we are getting fiber, plant-protein, vitamins, minerals, phytochemical, and antioxidants in our diet. This Tangy Tofu Salad Dressing has healthy soy protein (not to mention vitamins and minerals like calcium, iron, and folate) and will add more for your health then nutrient deficient sugar or oil laden salad dressings.

Nutritionfacts.org: GMO Soy and Breast Cancer “…Consumption of genetically modified food entails risk of undesirable effects, similar to the consumption of traditional food.Choosing the non-geo twinkly isn’t doing our body much of a favor.”

Harvard School of Public Health: “We’ve been told that regularly eating soy-based foods lowers cholesterol, calms hot flashes, prevents breast and prostate cancer, aids weight loss, and wards off osteoporosis. Some of these benefits have been attributed to a unique characteristic of soybeans—their high concentration of isoflavones, a type of plant-made estrogen (phytoestrogen).”

Soy and Health Update: Evaluation of the Clinical and Epidemiologic Literature: “The most distinctive aspect of the soybean is its high isoflavone content. Isoflavones are proposed as having a number of health benefits although not surprisingly, the degree to which the evidence supports these claims varies. For example, there is solid evidence in support of isoflavones alleviating hot flashes and improving arterial health in menopausal women whereas the evidence that they reduce risk of breast and prostate cancer, not surprisingly, is more preliminary. Concerns that the estrogen-like properties of isoflavones produce untoward effects in some subpopulations, such as postmenopausal women, are not supported by the clinical and epidemiologic research. Evidence indicates soyfoods can be safely consumed by all individuals except those who are allergic to soy protein, which is relatively uncommon in comparison to the number of individuals allergic to many other commonly-consumed foods.”

Is Soy Good or Bad for You? “For the study, researchers with the Harvard T.H. Chan School of Public Health looked at 239 women who had undergone at least one in vitro fertilization cycle, and analyzed their conception rates in relation to both their diet and their BPA exposure. (BPA, aka bisphenol A, is a synthetic compound found in many plastic products and household goods that has been linked to infertility and is present in more than 96 percent of Americans’ bodies, according to the Centers for Disease Control and Prevention.) Researchers found that in women who didn’t eat soy, higher BPA levels were associated with decreased chances of embryo implantation and fewer live births. However, in women who routinely ate soy, BPA levels had no effect on IVF success.”